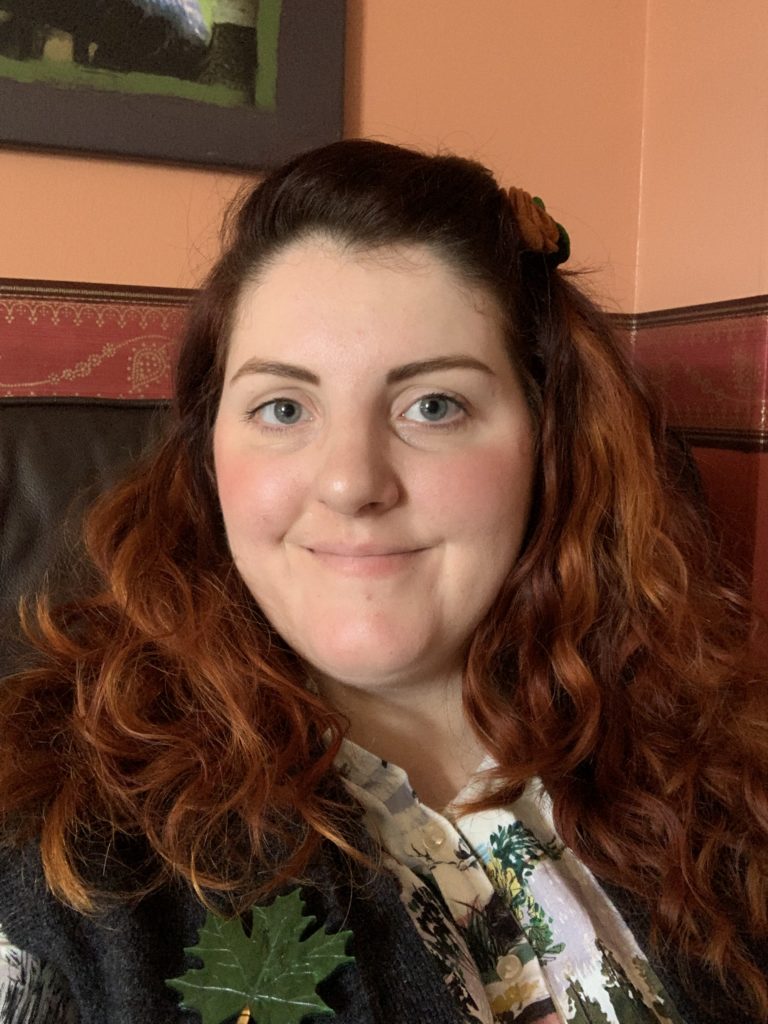 Today, I have the great honour to be able not only to revive this blog, but also and above all to be able to give you the first interview of Lucy A. McLaren, whose first novel entitled for the moment “A Child’s Awakening” – the first in a series – will come out in 2022!

You might ask why I’m telling you all this.
Not only did I have the chance to meet Lucy two years ago via Twitter (thanks to the social network for once!), but also to discover the story she was writing at that moment. I directly fell under the spell of Lucy’s story!

1/ Hi Lucy! Can you introduce yourself in a few words?

Hello! I’m Lucy, I’m a counsellor and fantasy writer. I am passionate about mental health and always trying to increase my knowledge in this area. In my spare time, I walk my dog, Evie (who is very old and slow these days), play video games (role-playing mostly), do yoga, read books (mainly fantasy, horror and thrillers) and watch TV shows and films.

2/ When did you start writing fiction? Was it something you have always pursued or did it come later in your life?

I had an interest in writing when I was young, which began when I was around 11/12 and read my first adult fantasy series (Sword of Shadows by JV Jones which, though unfinished, remains a brilliant read). I used to write a lot in the school library and swap stories with my friends. However, I was too critical on myself and, lacking confidence in my abilities, largely stopped writing for many years (although occasionally dipped back in and even did a short online writing course in 2015).

I started properly writing again a few years ago when I was completing my counsellor training. I got involved in a D & D group with one of my close friends and the makings of my first book (which eventually became A Child’s Awakening) sprouted from my character, Evelyn. From there, I dug out the brief story I’d begun writing during the online course in 2015–about a brother and sister called Raif and Rose and their black spaniel. Things began knitting together from there!

3/ What about fantasy interests you the most?

Ooh good question. I’ve always been interested in stories set in other worlds, I think. From books to film to video games to TV shows, I love everything that gives me the opportunity to be transported somewhere else and to experience life as these strange, compelling and unique characters. Fantasy, in particular, has always appealed to me more than anything else—I think because, while there can be elements similar to our own world, there are so many possibilities too. Though, saying that, I think the most magical settings and engaging characters often crop up in those fantasy stories that are steeped in realism.

4/ I know you can’t tell us too much right now about your project but… Can you give us at least a few clues on what it’s about?

I can certainly try! A Child’s Awakening is a multi-viewpoint story set in the kingdom of Septima, which is ruled in all but name by a ruthless organisation called the Commune. The Commune’s goal is to imprison and “train” any individuals born with powers—abilities which can range in strength from sensing moods of animals and people up to forging an unbreakable bond with animals and being able to control and influence people.

The story is told from the perspectives of Evelyn, Raif, Hector (on the “good” side) and Commander Sulemon (on the “bad” side). Evelyn, Raif and Hector are running from the Commune, while the Commander is working for them in hunting the others down. But, of course, things are never as simple as good and bad. I wanted each character to have their own motivations, thoughts and feelings and be sympathetic and understandable (if not completely likeable).

5/ How did you “meet” your publisher? Did you submit to agents or did you decide to directly get in touch with publishers accepting unagented submissions?

I’ll try not to ramble too much here, ha! I finished writing my book in November 2018 (thanks to NaNoWriMo) and was very eager to begin the submission process to agents, which I did at the end of 2018/early 2019. Now, I hasten to add, DON’T do this. I was far too keen and submitted a book that was nowhere near ready for querying. Over 2019 I continued submitting and receiving rejections (mostly form, a handful of “liked the concept but wasn’t drawn in”). I did eventually realise I may have somewhat bit premature in submitting the book and slowed down, sending the book out to more beta readers and doing more edits before submitting to agents again. I received 40-something agent rejections overall before I began wondering about other routes to publication—either contacting publishers directly myself or self-publishing.

I first learned about my publisher, Santa Fe Writers Project (SFWP), when I entered their Literary Award competition in 2019. Though my book wasn’t long listed, I began following them on Twitter and noticed they were doing an open call for fantasy and sci-fi novels in summer 2019. I submitted my book and heard back in November; it was a “No, but…” I was given very helpful feedback by the director, Andrew Gifford, who said he’d gladly see future drafts. He filled me with renewed confidence in the book—maybe it could be good enough!—so I immediately went back into editing mode. Having taken some time away from the book at that point, I found the process much easier and could see where I needed to make changes. I re-submitted the book in December 2019. Five months later, Andrew was able to offer me a contract for A Child’s Awakening—and here we are!

6/ Thanks Lucy, that’s a thrilling story! Finally, any word of advice to writers out there, submitting their stories?

Have patience on every step of the writing and submission journey. Even if this isn’t something you start with (as with myself), you’ll soon learn that writing the book is the easiest part. When I finished my first book, I should have allowed a resting period; I read this from multiple sources, but was too impatient—who has 6 months to wait?!— to follow the advice so I submitted a book to agents that wasn’t ready. I’ve since come to understand the value of this advice. With time away from a manuscript, you come back with fresh eyes and a renewed perspective on what works and what, perhaps, could do with some tweaking and improvement.

While you are submitting to agents or publishers, find something to distract you—whether that be delving into another full project, writing some short stories or poetry, or something completely separate from writing, whatever it is. You will eventually learn to stop refreshing your email inbox every 5 minutes, though it is hard at first.

Find someone who is supportive of your writing and your passion and hold onto them for dear life. I don’t know what I would have done without my husband and, of course, without you, Cindy! Twitter has a great writing community and that’s where we met. Reach out—there are others going through the same as you and that is infinitely reassuring when you’re pursuing such a subjective, ever-shifting goal.

Keep going—you WILL find that person who connects with your story and writing.